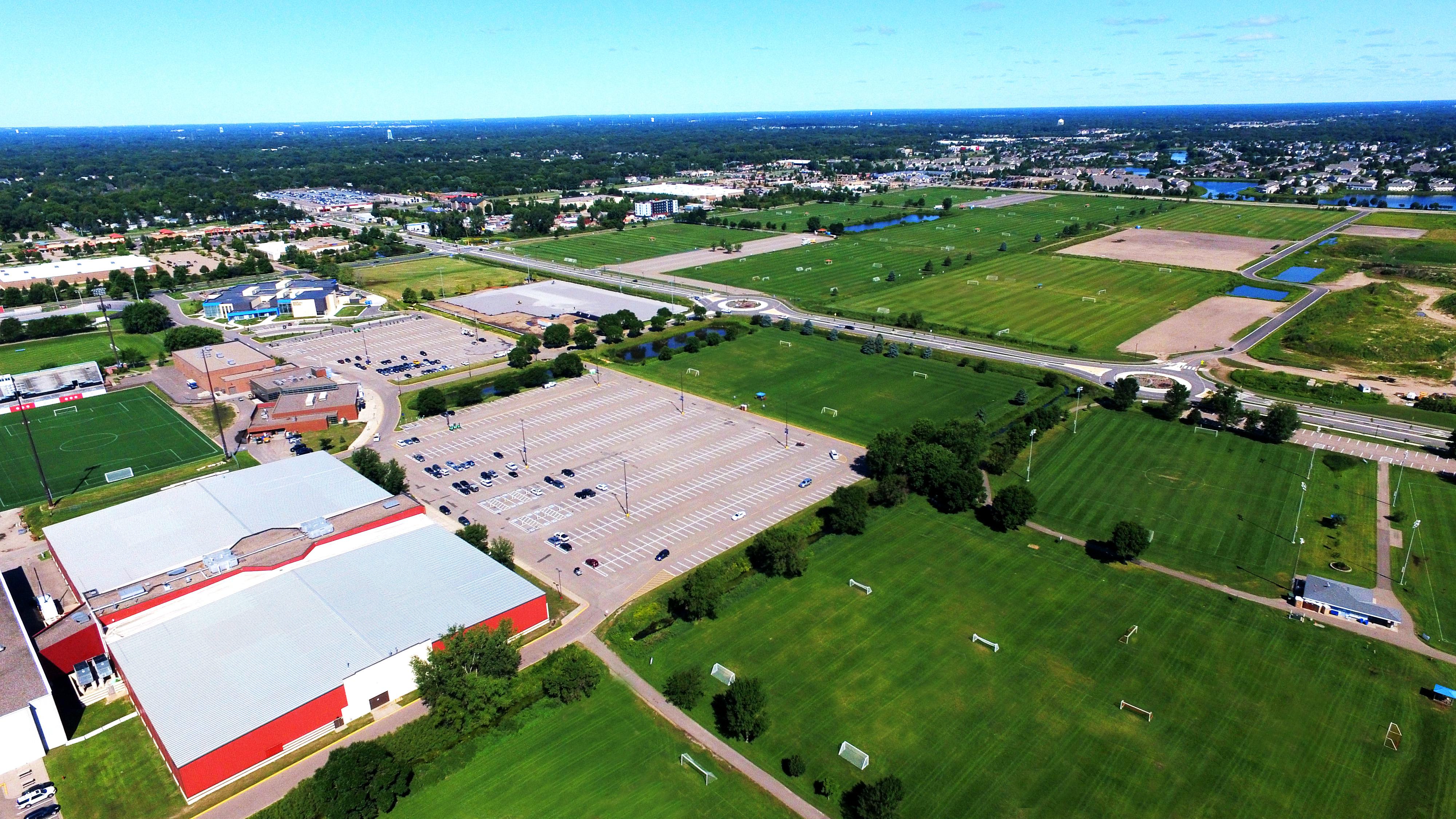 A person bringing an RV/Camper onto the NSC campus shall park in the appropriate lot designated for NSC campus events. RV/Camper parking is dry camping, there is not access to electricity, water, or dump stations. Park only in designated spaces or you will be subject to fines or being towed.

For Target USA CUP, RV/Campers should park in Lot B. RV/Campers cannot be parked overnight during this event and the National Sports Center is NOT responsible for any lost/stolen/damaged campers.

A person bringing a pet or other animal onto the NSC campus shall keep the animal under confinement or direct control at all times. Leads or leashes used to control animals may not be more than six feet long.

A person shall remove waste left by an animal under the person’s care and control and shall dispose of the waste only in an appropriate waste receptacle.

A person who brings an animal onto the NSC campus may not permit the animal to remain unattended or create a disturbance or a hazard. Ball throwing and retrieving activities are not allowed.

Pets are not allowed in the following NSC spaces:

Dogs that qualify as service animals under guidelines established by the Americans with Disabilities Act are allowed in all appropriate locations on the NSC campus.

Can I fly my drone at the NSC?

All drone usage must be approved by the event or program director, preferably well ahead of the event. If a drone user flies without prior approval, the pilot will be asked to land the drone and fulfill the following requirements.

Upon approval, the pilot must abide by all FAA-recommended safety guidelines, including:

These policies apply to non-commercial drone usage. Commercial drone photographers must fulfill all these requirements, but also must obtain prior written approval from the NSC.

When was the NSC built, who built it and how is it paid for?

The original complex opened in 1990. The facility was built by the State of Minnesota, but is operated by a non-profit corporation, the National Sports Center Foundation (NSCF). The NSCF operates the facility on a self-supporting basis. State funds were used to build the facility, and periodically the state has provided funds for capital improvements, but no state operating subsidy is provided. The original state investment in 1990 was $14.7 million, and to date the state investment totals $33.1 million. The NSC has raised a total of $40.6 million in non-state investment. The majority of that total comes from partners who invested in the Super Rink.

How many people visit the NSC?

Since opening its doors, the NSC has hosted approximately 54 million visitors. In 2017, over 4 million people visited, making it Minnesota's most visited sports facility.

Were all these facilities here when the campus opened?

No, the NSC has evolved and grown since its opening. The original complex had 24 soccer fields, the velodrome, residence hall, stadium and sports hall. By 1994, the NSC had developed over 50 fields by purchasing land north of 105th Avenue. The Super Rink opened in October of 1998 and was expanded in 2006. Victory Links Golf Course was completed in phases between 2000-2004. The Welcome Center opened in April 2005 and the Sport Expo Center was added in 2013. Currently the NSC offers 50 outdoor multi-used fields. Two fields (in the stadium) are artificial turf. All others are natural grass. Four are lighted.

Did the State of Minnesota also build the Super Rink, Victory Links Golf Course, and the Welcome Center?

The original four-sheet Super Rink opened in 1998 and was funded by a cooperative of eight local governmental partners along with the Minnesota Amateur Sports Commission (MASC). The partners include the cities of Arden Hills, Blaine, Coon Rapids, Mounds View, New Brighton, Shoreview, as well as Ramsey and Anoka Counties. Total construction cost was $11 million.

In 2006, four additional sheets of ice were added and new partners were brought in to help fund the construction -- Blaine and Centennial Youth Hockey, Bethel University and the Herb Brooks Foundation.

Victory Links Golf Course had $3 million of the $10 million cost paid for by the state. The rest was raised through private funds and in-kind sponsorship.

The Welcome Center was built by the state as part of the bonding bill in 2003.

The Sport Expo Center was opened in 2013. It was self-funded by the National Sports Center.

What kind of economic impact does the NSC have?

In the most recent calculation done using the Destinations International economic impact event calculator, the NSC produced over $83 million in economic impact annually, and $898,000 in annual local taxes. This computation only counts tourism spending, i.e. customers who stay overnight.