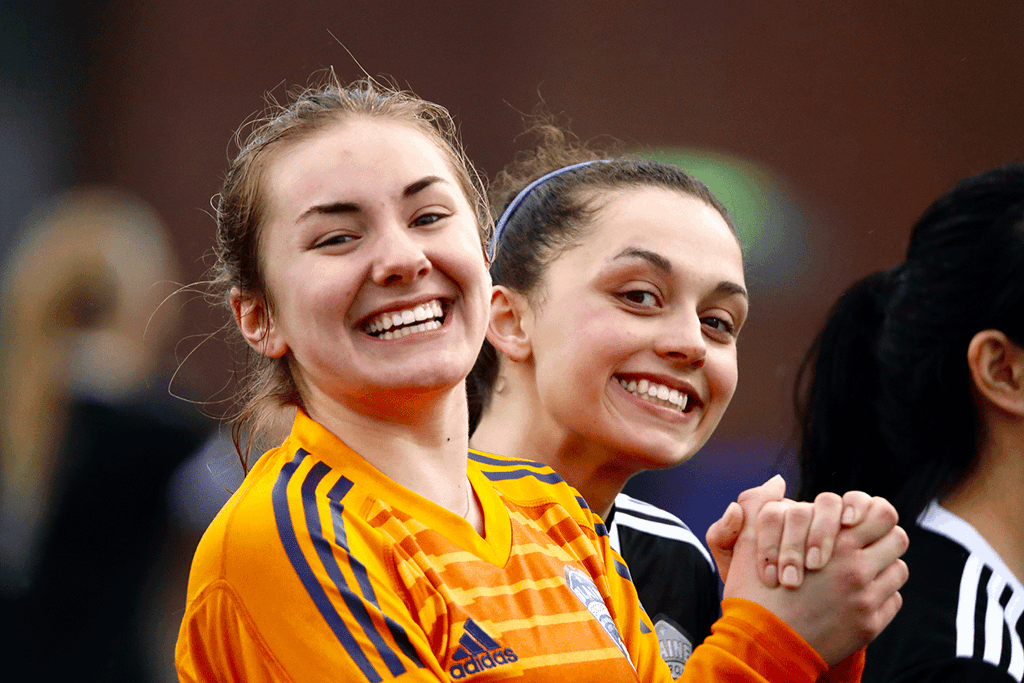 The National Sports Center is hosting the 3rd annual Girls Premier ID College Combine. This ID Combine provides players a snapshot of collegiate soccer. It is an excellent opportunity for serious players to be seen by college coaches and create connections.  College coaches from all over Minnesota and throughout the Midwest are invited to attend.

All customers are asked to review the following prior to arriving on campus:

Our facilities National Sports Center COVID-19 Preparedness Plan click here! The indoor facilities portion is at the top of the page.

Please note that this event does not allow spectators. Only participants and college coaches.

Schedule of the Day

What should I do to prepare for the combine?

What do I bring to the combine?

How many participants will be at the combine?

Will I be playing with my current teammates?

I am a parent, can I watch the combine?

When will I get my group assignment?

When will I hear from the attending college coaches?

Kasmarik-Mallett enters her sixth season as head women's soccer coach at Southwest Minnesota State in 2020. She was named to the position on July 23, 2015 and has compiled a career record of 30-56-3 overall, including 27-46-2 in conference play.

From Coon Rapids, Minnesota, Kasmarik-Mallett was a standout player for the SDSU women’s soccer team from 2005-08. She was a first team All-Summit League honoree during her senior season, leading the league with six game-winning goals, tied for the league lead in goals and ranked second in points. She helped lead the Jackrabbits to their first ever NCAA tournament appearance in 2008, scoring a team-high 24 points with 10 goals. She closed her career recording 39 points with 15 goals and nine assists in 75 games.

-Moening is currently the goalkeeper coach for both Men's and Women's programs at Hamline University. Moening is a former DIII All-Conference Goalkeeper at Hamline.

-Before retiring from college coaching after the 2019 season, Dan Rothert, was one of the most successful college soccer coaches in NCAA history at any level. One of the few coaches with over 500 collegiate wins, Rothert’s 613 wins at Loras College in Dubuque, Iowa, between the men’s and women’s programs, puts him in rarified company. Rothert built Loras College into a NCAA III powerhouse for both men’s and women’s soccer. In his 22 years with the men, his teams won 12 conference championships and made 12 NCAA tournaments, while advancing to 8 Sweet Sixteen’s and 5 NCAA Final Fours (including finishing as national runner-up in 2015).

Rothert also spent 5 years as Associate AD overseeing recruiting where he learned the in and outs of admissions and financial aid and uses this knowledge to help his clients find great fit opportunities and save money on college costs.

-All College Coaches receive a gift for attending in person.
-Ability to recruit virtually (more information coming soon)
-Refreshments and snacks will be available as well.

-Burnett entered the collegiate coaching ranks after a successful playing career at the University of Minnesota.

During her time at Minnesota, Burnett helped the Gophers reach two NCAA Tournaments and capture the 2016 Big Ten regular-season and tournament titles. She also earned All-Big Ten second team and All-Great Lakes Region third team accolades, while being named the 2016 Big Ten Defender of the Tournament.

Burnett graduated from Minnesota in May of 2018 with a degree in physiology. Prior to her time at Blaine Soccer Club, she worked at Minnesota Soccer Camps as a trainer and coach. A native of Colorado Springs, Colo., Burnett won two 4A state championships at Cheyenne Mountain High School. She currently lives in Minneapolis.

-Cripe is in her fourth season at Hamline University a private liberal arts school in St. Paul, Minnesota, she played collegiate soccer at Seton Hall University.  Cripe came to Hamline after previous stops at her alma mater, an assistant coach at two different MIAC schools, and most recently providing data analytics for D-I women's soccer power North Carolina. The St. Paul, Minn. native attended Cretin-Derham Hall High School before heading east for college. She was a three-year regular for the Pirates, captaining the team in her senior season. She graduated in 2005 with a degree in Journalism and also holds her Ed. D. in Leadership from the University of St. Thomas.

-Haflett joins University of Sioux Falls in 2020 after serving as the top assistant at Missouri Western State in St. Joseph, Mo., since 2018. Prior to working at MWSU, she was the assistant coach at the University of Mary in 2017. At UMary, Haflett earned a Master's degree in Kinesiology in 2019.

As the first-ever assistant at MWSU, she helped guide the Griffon teams to a cumulative 16-18-3 mark over two seasons.  She was highly involved in all aspects of the program, which included 11 Griffons earning All-MIAA honors in 2018 (eight) and in 2019 (three). While she was at MWSU, the soccer team earned a 3.5 cumulative GPA and completed more than 1,300 hours of community service. She also organized a donation drive for the St. Joseph YMCA and with the Sports Bra Project. At MWSU, she helped with the program's involvement in Team IMPACT, which is a national program pairing children who have chronic and severe illnesses with college athletics teams. She was also responsible for goalkeeper training with MWSU where goalkeepers in 2018 and 2019 earned All-MIAA honors.

As a student-athlete at Augustana, she was an All-NSIC goalie for the Vikings. Additionally, she has coaching experience working with youth boys and girls teams through Dakota Alliance Soccer Club and Brandon Valley High School.

-Mendez is in her second season as an assistant coach/goalkeeper coach for the St. Olaf women’s soccer program in 2020-21.

Mendez came to St. Olaf after two stints as an assistant coach/goalkeeper coach with NCAA Division I programs and also has coaching experience at the club level, following a standout career at St. Catherine University.

In 2018-19, Mendez worked at the University of Montana as an assistant coach/goalkeeper coach, helping the team to the 2018 Big Sky Conference championship while allowing just 1.09 goals per game with 10 shutouts in 22 games. The Griz recorded three-straight shutouts against higher-seeded opponents to win the conference tournament as the No. 5 seed. Starting goalkeeper Claire Howard earned Second Team All-Big Sky Conference honors and was named the Big Sky All-Tournament Team goalkeeper.

Mendez was a four-year starter at St. Catherine University from 2012-15 and graduated as the program’s career leader in goals-against average (1.45) and shutouts (19), while setting single-season records for goals-against average (0.86) and fewest goals allowed (16). Her 274 saves were second-most in school history.

-Burnett entered the collegiate coaching ranks after a successful playing career at the University of Minnesota.

During her time at Minnesota, Burnett helped the Gophers reach two NCAA Tournaments and capture the 2016 Big Ten regular-season and tournament titles. She also earned All-Big Ten second team and All-Great Lakes Region third team accolades, while being named the 2016 Big Ten Defender of the Tournament.

Burnett graduated from Minnesota in May of 2018 with a degree in physiology. Prior to her time at Blaine Soccer Club, she worked at Minnesota Soccer Camps as a trainer and coach. A native of Colorado Springs, Colo., Burnett won two 4A state championships at Cheyenne Mountain High School. She currently lives in Minneapolis.

- Bellis brings 15-plus years of soccer coaching experience to Concordia University, with a strong passion for the game of soccer and a commitment to a well-rounded student-athlete experience.

- Bellis led his led his squad to the best record in program history with a 17-3-3 record and a 12-1-2 record in conference play along with a NSIC regular season title. With the best record in program history and hosting and playing in their first ever conference tournament championship game Bellis led the team to their first ever NCAA Tournament appearance and winning their first ever NCAA Tournament game in a shootout victory over Northeastern State. Bellis was named NSIC Coach of the Year and he and he and his staff were awarded the Central Region Coaching Staff of the Year. Bellis oversaw one of the best defenses in the country in 2019, setting a program record with 15 shutouts, and a .63 goals against average, while holding their opponents to only 8.6 shots per game. Bellis's 2019 team had a streak of six shutouts in a row and a stretch of seven wins in a row during the season.

-Greathouse enters her second year as the graduate fellow on the Augsburg University Women's Soccer coaching staff in the 2020 season.

-Greathouse played at St. Catherine University for the 2013 and 2014 seasons, before an injury sidelined her collegiate career. In the 2015 spring season, she traveled to Barbados with her team, defeating the National Team of Barbados twice and University Of West Indies once.

-Cordero was a Divison-I goalkeeper at East Carolina University in Greenville, North Carolina. She went to ECU as a third string walk-on her freshman year, then earned the opportunity to start as a sophomore and kept it through the rest of her career. Cordero earned First Team All-Conference USA and Third Team All-South Scholar her senior year. She graduated in 2013 with a Communications degree and works as a reporter with WCCO-TV.

*Over 200 college coaches have been invited to attend and will be added as they register.