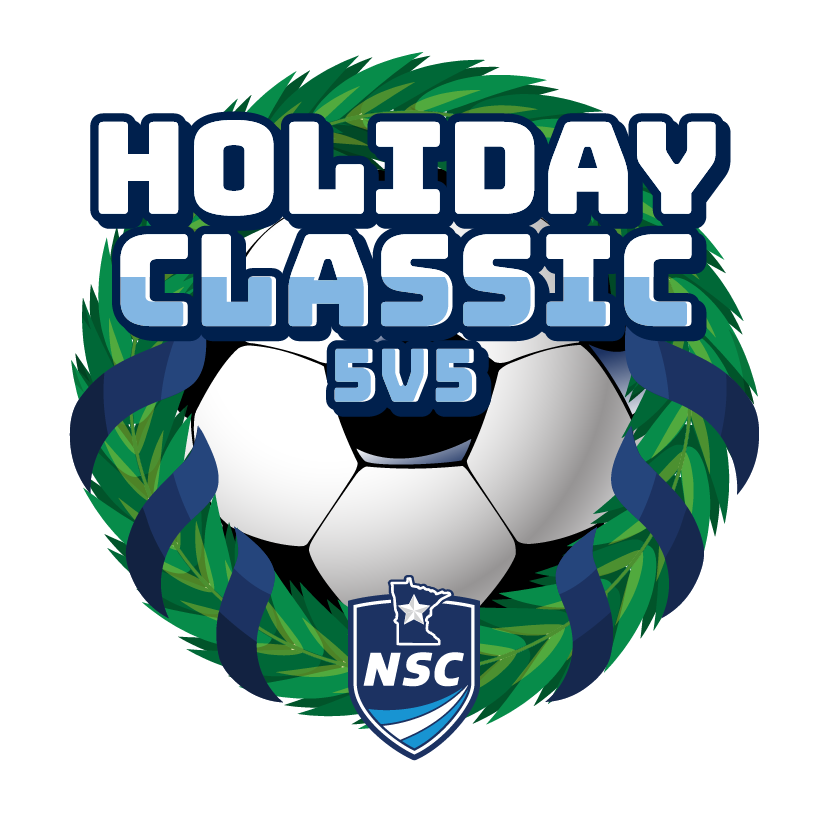 Our most popular indoor soccer tournament has become an annual holiday tradition! Youth and adult divisions are offered.

Join us this holiday season for fun and exciting competition in the NSC's annual 5v5 Holiday Classic Indoor Soccer Tournament. The Holiday Classic is a non-sanctioned tournament and accepts all teams, which include: club, intraclub, tournament teams or even just a group of friends who want to play.

The Best Dressed Coach of the tournament will be awarded a $50 Gift Card.

- A photo must be emailed to Tournament Director by Fri, December 30st at 10PM.

- The photo must be taken in front of our Holiday Classic Photo Backdrop.

- The winner can consist of more than one coach, but must be coaches from the same team.

- Outfit must be holiday themed to win.

Teams will play their three guaranteed games and play-off games (if qualified) in the same day, according to the dates listed per division.

These dates are subject to change depending on number of teams registered. Teams may be scheduled to play during the day.

Holiday Classic will follow the same rules as the National Sports Center Indoor Soccer Leagues, with the following exceptions:

Each team will receive:

1. Most Points
2. Record Head-to-head (does not apply in 3 way tie)
3. Goal Difference (goals for minus goals against)
4. Least goals allowed
5. Earliest application date

Maximum goal difference allowed per game will be 7. For example: Eagles beat the Tigers 13-2 the score will be recorded as 9-2.

The tournament will make every effort to avoid forfeits. A forfeit can only be determined by Tournament Headquarters. Forfeited games will be recorded as a 3-0 score.

Adult players must be 18 years old by the date they play.

Any team found to be using non-rostered or illegal players will forfeit that match. All forfeits are recorded as 3-0.

All 19U, High School and below team’s must also show proof of age for all players to be eligible to play. After age verification at final team check-in coaches should keep one of the following in their possession during the tournament to verify age should a question arise:

Coaches, are you short of players due to injury or other commitments? Aren't having any luck finding a player to complete your roster? Then the Holiday Classic Player Pool is for you. It connects coaches with players who want to have the Holiday Classic experience.

We are excited to offer you a new player pool experience at NSC Event HQ!  As a new user you will need to set up a household account in an adult's name.

Only players registered with USSF or FIFA affiliated associations are eligible.

Games Livestreamed
We are excited to offer livestream for those unable to attend the event. Live Barn provides Live & On Demand broadcasting of amateur and youth sporting events at the National Sports Center. Use the code: nsc1-hall to save 10% on your subscription. Register today to watch at www.livebarn.com
*Please note that games on Field B are not available

The National Sports Center has frequent opportunities for competitive vendors to support campus events. Below you will find information regarding how to get started in applying to be a vendor.

A completed vendor request form is required for your company to be entered in the National Sports Center’s Vendor Directory. Please provide all data applicable to your company. You may submit this form electronically or print and fax to 763.785.3660.

NOTE: Submitting this form does NOT guarantee that you will be selected as a vendor. The National Sports Center will contact you upon receipt of your completed document.

The National Sports Center thanks you for your interest in doing business with us.