BLAINE, Minn., (August 21, 2019) - Barclay Kruse, Chief Communications Officer, who has been with the Minnesota Amateur Sports Commission for over 28 years, announced he plans to retire from his position in September.

Kruse has worn numerous hats during his tenure.   He has been a core member of the team that has worked with local communities across the state to offer a variety of sports programs to Minnesota athletes including educational programs, Star of the North Games, and grant programs like the Mighty Ducks grant program.

During his tenure, the organization has grown in its offerings across the state and at its’ flagship facility, the National Sports Center in Blaine. 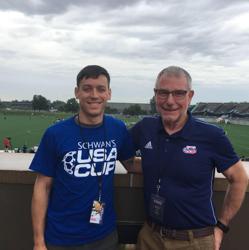 Barclay Kruse with his son Taylor at the 2018 USA CUP. Taylor was doing video production as a part of the tournament's Media Team.

Earlier this summer Kruse was awarded the Target USA CUP Founders’ Award.  The award honors those who have worked over the long-term to make the tournament great. The tradition began early on, going back to the Sons of Norway who founded the event (hence the award’s name) and continuing as USA CUP became the largest youth soccer tournament in the Western Hemisphere.

“He has been the media spokesman for USA CUP and the National Sports Center forever,” Chief Operating Officer Steve Olson said.  “Kruse has acquired an encyclopedic knowledge of the facility and our events over the years, which is not only useful but endearing to the rest of the staff.”

“He’s great at remembering facts and figures of things that have happened at the National Sports Center and for USA CUP,” Marketing Director Rob Lodge said. “We joke a little bit that he’s our event and company historian, but it’s really true. He’s been here a long time and has seen the ups and downs, the famous people, the big events we’ve hosted. Having a knowledge repository like Barclay is really helpful.”

Kruse’s positivity and passion for events that happen at the NSC rub off on his fellow employees, creating a happy and productive workplace.

“He’s a bit of an enigma, really, kind of timeless. Barclay is equal parts traditional journalist, schoolteacher, public affairs specialist, and eclectic sports enthusiast. He was an early adopter of new technologies and a big pusher of unique creative ventures for both organizations. He will be missed.”

“It has been rewarding to see the National Sports Center mature and grow into a facility that’s known around the world, and also to see the staff mature into event production specialists who can manage everything from developmental camps for kids all the way up to mega-events like USA CUP,” said Kruse.

“At the NSC we say that our events create memories that last a lifetime. My career at the NSC has certainly done that for me.”