One intern's personal reflection on the teamwork, fun, and stress of a summer at the NSC

As the boat from “Intern Island” pulls away from the National Sports Center (NSC) with its 12 inhabitants waving goodbye to the summer of 2017, it is important to take a look back to how we all managed to survive and thrive behind the scenes of the world’s largest stage for amateur sports. Together, the 2017 class of NSC interns learned to ride a track bike with a fixed gear and no brakes, at a proficient height and speed on the velodrome, earned concussion assessment certification, aided with “accounting filing” and most importantly played an integral role in the largest youth soccer tournament in the Western hemisphere. 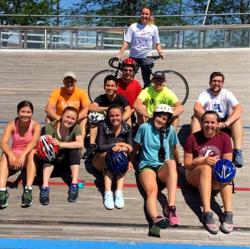 Under the expert instruction of NSC Cycling Director Bob Williams, the interns learned how to ride a fixed gear bike on the NSC Velodrome.

(The intern work cubicles at the NSC are clustered together. This year’s intern class dubbed their work space, “Intern Island.”)

Just a week removed from the end of Schwan’s USA CUP, my internship with the NSC has finally come full circle. Ever since the first remarks of orientation day, anticipation has been consistently building for Minnesota’s largest soccer tournament. Full-time staff members regaled us interns with tales of 15 hour work days and NSC campus floods, but we stubbornly pressed forward towards the looming USA CUP start date.

Former interns now serving on the full-time staff Eric Besse, Kallie Blanchard, and Gabby Lister sat at the head of the table in the Duffy conference room on our first day in the office to provide answers to all the questions we had coming into the summer. I vividly remember the trio describing the whirlwind of USA CUP that would be over in the blink of an eye. Eight straight days of 12-plus hour work days filled with constant chaos would fly by? Doubtful. 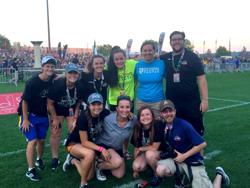 May quickly became June, and soon we were celebrating America’s Independence Day. Months of preparation and build-up came materialized on July 13, when a line of team managers queued in the NSC Welcome Center, eagerly waiting for USA CUP final team check-in to commence. Weeks of discussion, agendas, meetings, and e-mails finally became a reality.

On July 14, USA CUP officially began. The change in energy on campus at the NSC was palpable immediately when I set foot on campus that first morning. Before I could truly take in everything going on at the NSC, the staff golf carts were being hauled away, the parking lot was empty, and the Hub and all of its activities had been packed away for next year. The tournament that had been the focal point of my life for three months was gone in a flash.

Adaptability during USA CUP was vital. With 1,168 teams, 2,607 games, and countless parents, coaches and siblings gracing the NSC, things never truly went as planned. One day, my story was pulled from publication just an hour and a half before my deadline. The next day, two interviews fell through due to visa problems. USA CUP was a consistent diet of curve balls, but the 12 interns shortened their swings, widened their stances and hit home runs throughout the duration of the tournament. At least we hope we did. 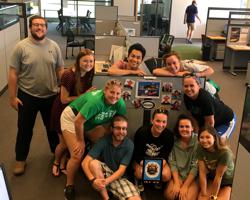 Over the course of this internship I have interviewed two current professional athletes, a professional soccer coach, the Sporting Director of Minnesota United, a former Costa Rica national soccer team player with 65 international caps, two professional soccer freestylers, youth soccer players from Indonesia, the Netherlands and Denmark, and some of amateur soccer’s greatest talents. Every week has presented spectacular new opportunities and has been truly engaging and enjoyable.

The interns even successfully completed their own version of the reality competition show, “Survivor”, where co-workers became enemies fighting for immunity. Alliances were formed, deceit was rampant (although I’ll admit this came from my company laptop), and a victor was crowned in referee intern Erinrose Carr. I think the full-time staff would agree that competing over an immunity idol made interns complete mundane office tasks at hyper speed. As the self-proclaimed puppet master and member of three simultaneous alliances, I was quite upset when my game play toppled due to a game of rock-paper-scissors.

After work on Friday July 28, the 12 NSC interns will return to their abodes where they will either wait out the commencement of the 2017/18 academic calendar, or enter the real world of post-grad employment. For some, the journey home will take days, others 10 minutes.

Our summer at the NSC started together in a conference room with awkward introductions and uncomfortable silence, but through hours of bundling medals, attempting to navigate the cafeteria and lifting cattle gates (fencing,) we formed a cohesive unit capable of tackling one of the country’s largest sporting events. We also had a healthy helping of fun along the way, an essential ingredient to any successful product.

It is bittersweet to reflect on such a great summer and to see the clock hit 5:00 p.m. on the internship’s final day, but I am confident this will not be the last time the 2017 NSC intern crew will be united.

In the words of the great Dr. Seuss, “Don’t cry because it’s over, smile because it happened.” I’ll certainly be smiling on my drive home tonight.