Blaine, Minn. (August 3, 2017) – After announcing last year that the Youth Club Championships (YCC) and U.S. Open will be held side by side at the National Sports Center (NSC) in Blaine, Minn., through 2019, USA Ultimate revealed a new identity and logo treatment for the combined event. 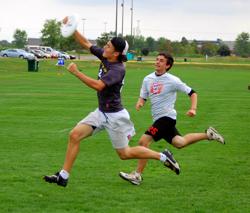 As part of the rebrand, the event will consist of two main divisions – the Youth Club Championships (YCC) and the International Club Championships (ICC). The nomenclature allows for USA Ultimate to retain the YCC label – an event with a 13-year history of crowning national champions in the youth division – as well as more accurately describe the global nature of the elite division, which this year will attract teams from Canada, Colombia, Italy, Japan, Mexico, and Great Britain, and in the past hosted squads from Australia, Denmark, Germany and Panama.

The event runs at the National Sports Center August 4-7. Each division will compete over three days with the ICC division running Aug. 4-6, and the YCC division taking place Aug. 5-7.

Ultimate, originally known as ultimate Frisbee, is a non-contact team sport played with a flying disc. Points are scored by passing the disc to a teammate in the end zone. As in football and soccer, there is passing, interceptions, turnovers and incomplete passes.

The International Club Championships division will include men’s, mixed and women’s subdivisions. The ICC will play their semifinals and championships on the NSC’s marque fields, U1 (Stadium) and U2 (Exhibition Field). ESPN will broadcast seven semifinal and championship games from the NSC Stadium. Six of the games will air on ESPN3 and one on ESPN2.

The current men's and women's world champions will compete this weekend. Revolver, from San Francisco, won men's title, and Riot, from Seattle is the women's champion.

Here is the list of the teams competing in the elite International Club Championships, as well as each division’s playoff schedule.