Thirty-two teams – 16 each in men’s and women’s divisions – will compete in one of the newest Olympic sports. Rugby Sevens made its Olympic debut at the Rio 2016 Olympic Summer Games, and 11 of the 24 members of Team USA previously honed their crafts at the USA Club 7s National Championships.

“The event will play a role in our plans to grow rugby even further here,” noted Minnesota Youth Rugby Executive Director Sean Lindersmith. “Minnesota is a great state with a proud sporting history. We are honored to continue that by hosting the Club 7s National Championships.”

There are local entrants in both divisions, Metropolis in the men’s and Minneapolis Rugby in the women’s.

The National Sports has a history of hosting major USA Rugby events. The Women’s National Championship was held annually at the NSC for a three-year span, 2003-2005. In 2004 the NSC Stadium was the stage for a USA-Canada international test match. And in 2013, USA and Canada’s U20 National Teams played a two-match test series at the NSC. 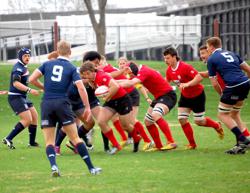 In 2013, the NSC hosted a two-match test series between USA and Canada.

Additionally, in 2010 the NSC hosted the Bingham Cup, the biennial world championships for the gay and inclusive rugby community. And the NSC has previously been home to rugby for the Minnesota State High School Championships.

“While the National Sports Center has a proud history of hosting major rugby events, this is our first time hosting a rugby sevens tournament,” said Darin Thompson, the NSC’s Senior Director of Sport Services. “Coming off the sport’s debut at the Rio Olympic Games last year, we’re expecting a lot of fan interest.”

This will be the fifth time the Club 7s National Championships will be held in the Midwest since the event began in 1985. Milwaukee hosted the event from 1986 to 1988, and Des Moines was the host in 2015.

Tickets for this year's Club 7s are priced at $23 for a weekend pass, or $15 per day, and will be available soon. For those unable to attend in person, the event will also be broadcast live on The Rugby Channel.

Here is the roster of teams competing this weekend. All teams qualified through regional qualifying tournaments around the country.

Here is the weekend schedule:

Click on the link below for a detailed match schedule: