It wouldn’t be much of an exaggeration to say that Jack Hiemenz grew up with a golf club in his hand. So when the Blaine resident and Spring Lake Park High School alum got the chance to caddy at the 3M Championship tournament August 4-6, he vividly recalls one singular moment.

Stricker, a 24-year veteran of the PGA Tour, is golfing royalty. With 12 career tour victories, and three Ryder Cup appearances, Stricker was among the most famous players playing at the TPC of the Twin Cities, and the moment was not lost on Hiemenz.

“Just knowing that all those guys had played on the PGA Tour, had won major championships. It just gave me goose bumps just being around those players.” 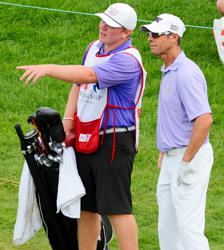 The 3M Championship was Hiemenz’s first tournament caddying experience, but he didn’t luck into the job. He earned it.

Hiemenz started playing golf with his father at the age of five. He recalls playing his first round at Victory Links on the campus of the National Sports Center when he was seven years old.

“We had just moved here, that was 2004, and they just had nine holes then,” he recalled.

“My buddies and I played here all the time,” he said. “I did The First Tee program here for a couple years here, and then I played golf at Spring Lake Park High School. I also grew up playing hockey. A lot of my hockey buddies also played golf. And now we all probably love golf the most.”

“Youth golf is part of our mission,” said Roth. “When I hear of stories like Jack’s, it makes me proud.”

When he turned 16, Hiemenz landed a job at the course, and he still spends his summers working there.

“I started outside cleaning carts, and cleaning and picking up balls on the range,” he recalled.

Now 21, and a student at Arizona State, Hiemenz teaches lessons and works in the pro shop. He tried walking on for the ASU golf team, but didn’t make the team. He currently plays for the Sun Devils’ club team, and hopes to land a walk-on spot.

“I talk to the coach all the time,” he says. “I may have a shot. But even in club golf, we still travel all over the country playing in tournaments.”

Every year, on the Tuesday before the 3M Championship begins, Victory Links hosts the Qualifying Tournament. This is a one-day, 18-hole tournament, to select a handful of additional qualifiers who can earn their way into the big show at the TPC of the Twin Cities, just two miles north of Victory Links. It’s a pressure-cooker of an event, and the odds are long. This year 22 players teed it up; only four would quality.

Victory Links hosts the tournament annually, and it’s the one time each year touring professionals visit the National Sports Center course. Hiemenz was very familiar with the event. So he knew exactly who he was talking to when he approached a golfer named Jeff Brehaut on the practice range the day before the tournament. 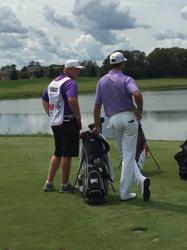 “He was on the range, and I went up and introduced myself,” Hiemenz says. “He told me he was playing in the qualifier and if he got in he’d need a caddy. He said he’d never played the TPC, and never played Victory Links either. I told him I’d played both courses a lot.

Hiemenz had caddied at the 3M Pro-Am several times, carrying the bag for big-name pros like Jim Thorpe, Dana Quigley and Rod Spittle. But he had never caddied the real tournament.

But first he had to help Brehaut qualify. Brehaut did his part shooting a 6 under par 65 and winning the qualifier. Brehaut is a teaching professional from Mountain View, Calif. He lacks full tour status because his main focus is teaching golf.

“He told me he teaches 35 lessons a week or so, so he doesn’t have much time to play tournaments,” Hiemenz said. “He’s entered three tournaments this year and qualified twice, so he’s a quality player.”

Up next, the big show. Hiemenz adapted to the long days. He was expected to show up for work 90 minutes prior to tee time to get Brehaut’s clubs cleaned and ready. Then to the practice tee. Five hours for an 18-hole round, and then back to the range for an additional hour of practice swings.

“I was a little nervous. I didn’t want to screw anything up,” Hiemenz said. “Sometimes golfers will blame their caddies, but he was a really nice guy, and I was comfortable with him. He made it super easy. He listened to all the advice I gave him, because I’ve played a lot of golf there. I just want to make sure I didn’t mess anything up, like walking in someone else’s line. Even though I play a lot of golf, you can do that by accident. You don’t want to get the other pros in your group mad.

“Just knowing the game helps a lot, knowing how to read a pin sheet, getting the correct yardage, reading the greens. One of the strongest parts of my game is my putting, so when we got on the green I was able to tell him, ‘Jeff, this is where it’s going to break.’”

Hiemenz also had to learn some of Brehaut’s quirks.

“Golfers are pretty superstitious,” Hiemenz said. “He only wanted half his towel wet, so he could wipe his hands on his towel. He only wanted three golf balls in my caddy bib at a time. He had some weird drills he did on the range. I had to hold a stick over this shoulder to he was lined up perfectly. He told me where he wanted me to stand when he was hitting.

“During the Pro-Am it rained on us one day. It was a challenge trying to keep his grips dry, keep him dry, keep his towel dry. I was just soaked. It was just pouring on us, so that was tough. Luckily it didn’t rain on us during the actual tournament.”

“I was just trying to keep him positive,” Hiemenz said. “He was hitting the ball so good all week. He just had a tough time making putts. He knows he’s a better putter. It was tough to see that, because he was just hitting the ball so well. You get a little down, but you just need to keep them positive.”

Brehaut eventually finished in a tie for 65th at 2 under par. The winner, Paul Goydos, shot 20 under, and won on the first playoff hole against Gene Sauers.

Hiemenz said he was disappointed in the result, but not enough to tarnish the experience.

“You learn a lot caddying. Being next to all the players and talking to these guys, like Fuzzy Zoeller and Colin Montgomery, who’ve been playing their whole lives. I was realizing that I can do this. I feel like I was capable of hitting those shots.

”My buddy and I went out and played Saturday night, and I instantly felt like I was a better player, just by being around all those guys.”

Hiemenz was paid a set fee and a percentage of Brehaut’s winnings, but finishing back in the pack, he won’t be paying off any college loans with his tournament paycheck.

“I would have done it for free, just for the experience,” he said. “But the money obviously helps, being a college kid. I like working at Victory Links, but the money was better caddying.”

Hiemenz also learned one additional fact about life as a caddy.

“There is a caddyshack – it’s a real thing,” he laughed. “We could get in anytime with a caddy badge. They had food, drinks, sun screen, bug spray, and an ice cream machine. That was the caddy hangout; that’s where I met a lot of the other caddies.”